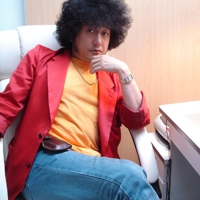 Shinichi Watanabe (aka “Nabeshin”) is known to anime fans as a larger-than-life, iconic figure with an outrageous sense of humor. He directed the comedy anime series Excel Saga, Nerima Daikon Brothers, and Puni Puni Poemy, which feature frenetic pacing and appearances by his animated alter ego, a mysterious, recurring character with an afro and distinctive outfit who is tangential to the story. Nabeshin has also served as series director for The Wallflower and Tenchi Muyo! GXP, and he can be found in these series as well, in cameo or supporting roles.

Nabeshin has been quoted as saying that he places great importance in making viewers laugh. Stating that he values laughter as much as tears, his preference is to motivate viewers to have fun and enjoy a show. He reasons that his success stems from provoking the same, strong emotional investment—in a humorous way—as a traditional, sentimental story does.

Nabeshin has also written lyrics for the opening songs of Excel Saga and Tenchi Muyo! GXP, and has served as storyboarder and episode director for a variety of other anime series. Nabeshin will be doing numerous panels at the con, including "Friday Night in Tokyo (18+)", "Q&A with Nabeshin's Afro," and more! 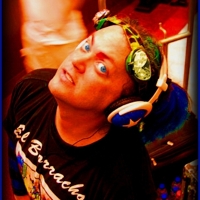 Greg Ayres can usually be found rockin’ out somewhere, whether animated or not. From the loud-mouthed Hideki in Nerima Daikon Brothers, to Koyuki, singing with the the band in Beck:Mongolian Chop Squad, he’s always glad to shake things up a bit. He is thrilled to be able to add the roles of Uesugi Kenshin in Sengoku Basara, Seikechi Tayama in Oh Edo Rocket, and Abe in Big Windup to his list of new roles. He can also be head as Son Goku in Saiyuki, Chrono in Chrono Crusade, Kaoru Hitachiin in Ouran High School Host Club, Yuki in The Wallflower, Leo in Ghost Stories , Satoshi Hiwatari in DNAngel, Kaworu Nagisa in the Director’s Cut of Neon Genesis Evangelion, Negi Springfield in Negima, Heihachi in Samurai 7, Jr. in Xenosaga:The Animation, Tsujido in Speed Grapher, Roan in Ragnorok The Animation, Yamazaki in Welcome to the NHK, Nowy in Glass Fleet, Gau Ban in Shadow Skill, Pope Alessandro XVIII in Trinity Blood, and a bunch of other titles he’ll probably forget to mention. FUNimation recently announced Greg as Nagisa in Free!

When he’s not in a booth with headphones on, you can usually find him sporting headphones of another variety behind “the decks”. A veteran nightclub DJ of many years, Greg has really enjoyed the opportunity of doing something else that he truly loves at conventions. From packed rooms at anime conventions, to the legendary stage of The Knitting Factory (NYC), Greg never misses an opportunity to share his love of music with anyone who will listen. 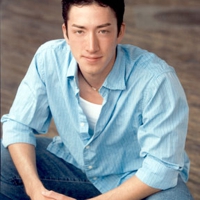 Todd provides voices for several of the most famous anime characters, including North Itality in Hetalia, Ling Yao in Fullmetal Alchemist, Natsu Dragneel in Fairy Tail, and Hikaru in Ouran High School Host Club, among many others. Todd Haberkorn is currently a proud member of the Anime community and continues to be its humble servant by way of english dubbing. Haberkorn received his BFA in acting from Southern Methodist University and continues to work professionally, primarily in Texas and surrounding states, as an actor, director, producer, and writer. And while the FUNimation Podcast is no more, you may have previously seen him star in it.

Catch Todd’s voice as lead roles in Sgt. Frog as Keroro, Suzuka as Yamato, Ghost Hunt as Naru, Claymore as Raki, Holic as Wataknuki, D. Gray Man as Allen Walker, Sands of Destruction as Kyrie, Soul Eater as Death the Kid, and some others he can’t say right now. A few supporting roles include Itsuki in Shuffle, Ichimoruken in Hell Girl, Firo in Baccano!, Kono in Darker Than Black, Hikaru in Ouran High School Host Club and Khoza in One Piece. Check out most of the shows listed above on Hulu.com or Funimation.com. When not in the booth, Todd is a producer with his company, Out of the Office Productions. Todd is represented by The Horne Agency. 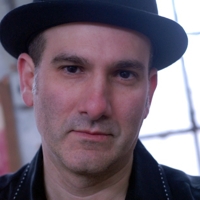 The Eric Stuart Band released their latest album, Lipstick and Barbed Wire, in June 2013. This is their sixth full-length release on the indie label Widow’s Peak Records and it features Grammy winning guitarist Peter Frampton.

In the summer of 1997, Eric’s classic rock and roll style was noticed by Ringo Starr who invited him to open the Ringo Starr and His All-Starr Band tour, featuring Peter Frampton, Jack Bruce (Cream), Gary Brooker (Procol Harum) and Simon Kirke (Bad Company). That exposure served as a springboard for Eric to open for the Lynyrd Skynyrd, Kenny Wayne Shepherd, Paul Rodgers tour that same summer. Since then, Eric Stuart has been touring on a regular basis including two U.S. tours with Peter Frampton. In 2000, Frampton produced Eric’s next album, Blue, Dressed In Black, along with John Regan and Harvey Jay Goldberg.

Now living in Nashville, Eric’s songwriting talents have given him the opportunity to begin co-writing with some of Nashville’s finest songwriters. The band’s great live show of all original, guitar-driven rock/pop has made the Eric Stuart Band a must-see in the area. Other projects in Eric's impressive career are Viva Piñata, Ultimate Muscle, Dinosaur King, Kirby, Slayers, Chaotic, Sonic X, TMNT, GoGoRiki, One Piece, F-Zero, Magical DoReMi, Fighting Foodons, Shaman King, Descendants Of Darkness, Labyrinth Of Flames, Valkyrie Profile, Tama And Friends, and voicing many national radio and TV commercials and audiobook narrations.

Samurai Dan and his wife, the beautiful Lady Jillian, are masters of marital... erm... martial mayhem, and full-time martial arts instructors, specializing in 16th century Samurai arts. When not teaching at their dojo, the Kojokan, they travel across the country performing and teaching the ancient ways of the most famous warriors in history. Their shows and demonstrations uniquely blend history, combative skill, and humor, in a way that will both educate and entertain audiences both large and small. The dynamic duo also collaborated to write, direct, host, and star in a 12 episode TV series entitled "The Way of the Samurai," and Daniel is also an author with several martial arts articles published, and he is currently working on his second full-length novel. 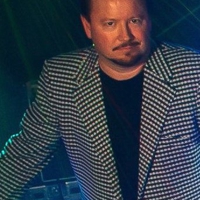 Sonny Strait is a prolific voice actor who is best-known for roles such as Maes Hughes in Fullmetal Alchemist and Arsène Lupin III, in addition to Krillin in DBZ. Sonny is also known as an illustrator for one of the most famous, independently published comic book series Elfquest. Sonny Strait has over 20 years of experience in the arts.

Besides Krillin, Hughes, and Lupin, Sonny has worked on many popular animated characters including Usopp from One Piece and Cartoon Network’s laid back, robot host Toonami Tom. He has also worked as a writer and director on several TV series including Dragonball Z, Case Closed and Lupin the Third. 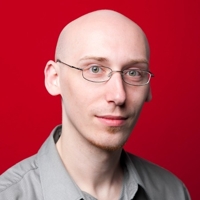 Trevor Mueller works at an advertising agency by day, and writes comics by night. His latest project is ALBERT THE ALIEN, appearing on Mark Waid's THRILLBENT site. He has also self-published several other works including including Junkyard Chase, The Fan, and Los Ojos. He has also contributed stories to several anthologies, including HOPE: THE HERO INITIATIVE from Ronin Studios and READING WITH PICTURES from the non-profit of the same name. He is also the writer/artist/creator of several award-winning webcomic series (www.trevoramueller.com), and regularly reviews movies, video games, and comics. Trevor gives lectures and presentations throughout the country at conventions and schools on several topics, including the power of combining creativity and literacy. Trevor currently lives in Chicago with his wife, Beth, and his cat, Waffles. 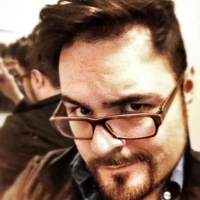 Gabo is a COMIX GORILLA and COLORIST SHOGUN. He draws comics in a cold damp dungeon located directly under Fermilab in Batavia, IL. His comics include Charley Loves Robots, which can be seen in several issues of Elephantmen, published by Image Comics, Jesus Christ: In the name of the Gun, and Albert the Alien. He has also been part of the Harvey award nominated anthology Reading With Pictures. He is an Eisner and Harvey Award winning colorist. His color art can be seen in several issues of Will Eisner's The Spirit and All-Star Western, published by DC Comics. He is the creator of comic battling site Entervoid.com, and co-founder of independent comic publisher Pulpo Press.

V is for Villains

V is for Villains is a nationally touring, high energy electronic rock band originating from Chicago, IL. A group of highly skilled stage performers, the band blends original music with colorful costuming and back stories to create characters with a comic book and sci-fi genre feel. Well known throughout the country for their stylized performances at major venues like The House of Blues, The Hard Rock Cafe and Chicago's Metro just to name a few, V is for Villains is also in high demand at comic book and anime conventions. V is for Villains, is led by front man and lead vocalist Mr. Agitator, and is joined on stage by the likes of Fallon Flynn on guitar and Vex on keyboards and female lead vocals. This is one show you don’t want to miss! 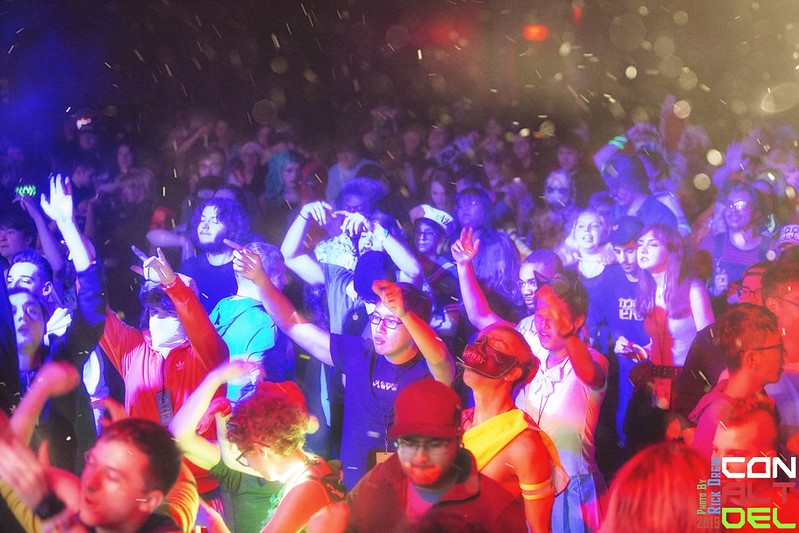 CAD 2022 is proudly brought to you by the incredible anime fans at AnimeCon.org, supporting the nerd community.